How to choose the correct type of light bulb. 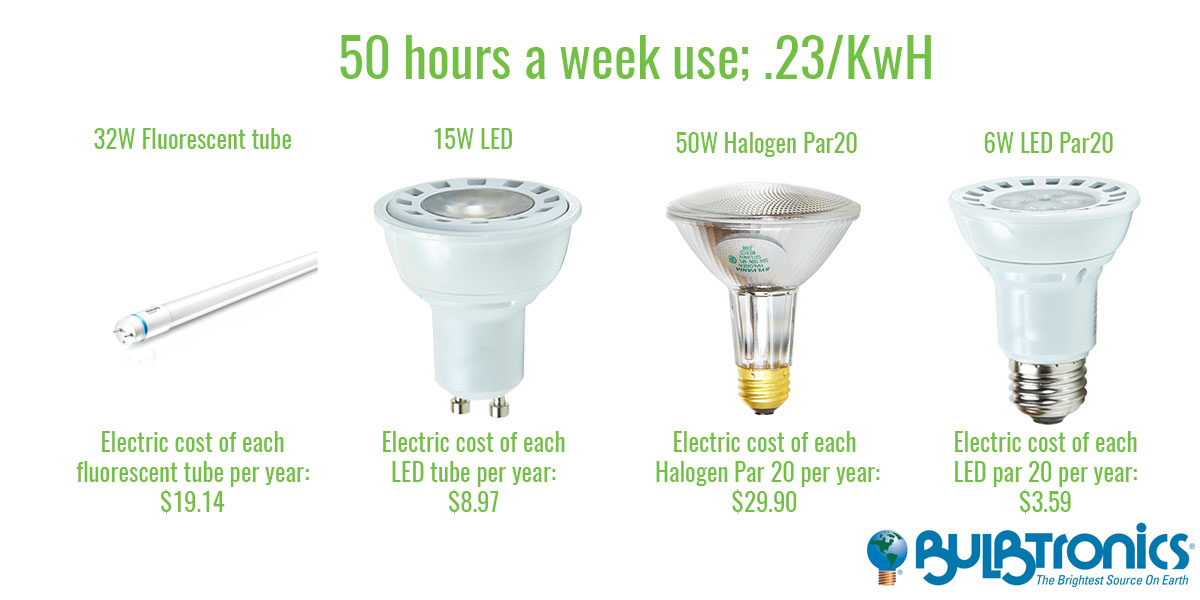 How to choose the correct type of light bulb.

As most are now aware, LED lamps are on the market that can replace many of the most commonly used lamps. However, you likely noticed that they are several times more expensive than the type of lamp that they are replacing.  Is it worth it to take the plunge and invest in a longer lasting, more efficient alternative?  Well that depends on a few things, including how much you pay for electricity, how many hours a day you use the light source, how expensive the two lamps that you are comparing are, and how difficult is it to change the lamp.

A simple Formula exists that will calculate how much a lamp costs to run a year, using the following inputs:

To calculate the cost of using the lamp for a year, we use the following formula:

Using this formula we can compare how much several sources cost to use per year, and in turn, can then see how quickly switching to LED would recoup the more expensive cost in initial cost.  The more expensive electricity is in your area, and the more hours a day that the lamp is on, the faster that an LED will “pay for itself” in savings.

Where I live in New York, Electricity is relatively expensive.  The average price is 23 cents per KwH.  As an example, here are some sample numbers I ran for one of my client’s office buildings:

Electric cost of each fluorescent tube per year: $19.14 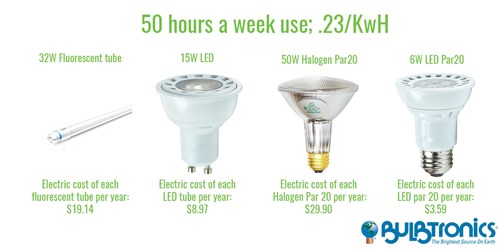 It is also useful to compare the average life expectancy of different lamps.  Incandescent and halogen sources typically last from one to several thousand hours.  Fluorescent sources typically last from 5 to 15 thousand hours.  LED sources need to be replaced every 25 to 50 thousand hours. Considering the fact that there are typically 8760 hours in a year, you can quickly see how many years you expect a lamp to last based on average daily use.  If a lamp needs to be replaced every year or two, then switching to a more efficient and longer lasting source is more often than not a logical financial decision.

The brands you need from the company you trust.